When I was in London a couple of months ago, I couldn’t resist popping into Foyles on Charing Cross Road to while away some time browsing their books.

Along with Selfridges, Foyles is a place that I could quite happily set up home in. Whenever I watch Breakfast at Tiffany’s and Audrey Hepburn’s character Holly Golightly  says that ‘nothing very bad could happen [at Tiffany’s]’, it makes me think of Foyles.

Now that I’m living in London, it’ll be the ideal place to go to recover from a bout of what Holly calls ‘the mean reds‘ – not least because it’s more affordable than sustaining a habit for Tiffany’s finest wares.

Having said that, my bank balance was definitely a little less healthy after I’d ransacked the French language book and DVD section in the Grant and Cutler languages shop at Foyles.

I’d bought a couple of DVDs as well as a copy of En attendant Bojangles, which came out in France earlier this year. As the cashier was scanning it through, she mentioned how popular it was in France, and that lots of her friends had recommended it to her. 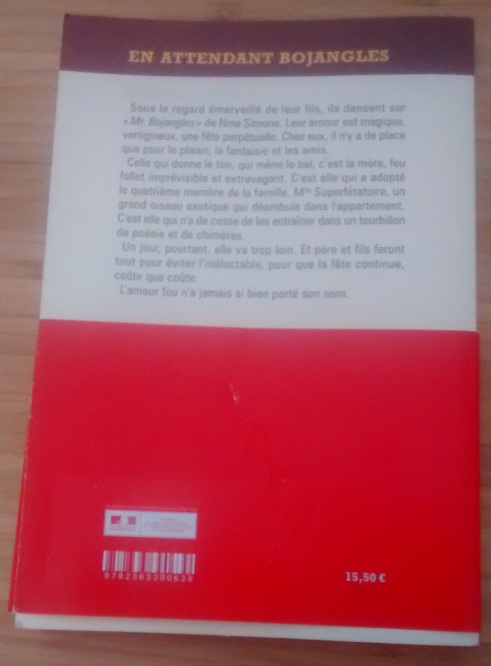 En Attendant Bojangles (Waiting for Bojangles) takes its title, as you may have guessed, from American jazz standard Mr Bojangles. When it was released this year, the book won several awards in France. It was also nominated for the Prix Goncourt de Premier Roman, where first-time authors compete to win a version of the prestigious Goncourt Prize.

If you’d like to buy a copy, it’s available online on Amazon or at Foyles or FNAC. Or if you’d prefer to wait for the English version, that’ll be coming out next year.

It’s the first novel by French author Olivier Bourdeaut, who worked as an estate agent before deciding to focus on writing, his childhood ambition.

He has explained in recent interviews that although he is mildly dyslexic, this hasn’t stopped his enjoyment of writing. He has also mentioned that his family did not own a TV while he was growing up, and that this made him very interested in literature and reading from a young age.


What is the main storyline:

The book is told from the point of view of an unnnamed young boy who lives in Paris with his parents and the family pet, a crane called Mademoiselle Superfétatoire – or, in English, Miss Superfluous.

While his classmates’ parents work nine to five and plead with their children to do their homework, his family has totally different priorities. Their life is so removed from the norm that he ends up inventing purposely mundane home routines to fit in at school and to avoid arousing his teacher’s suspicions.

Georges, the easygoing family patriarch, spends hours holed up in his study writing novels, only to be told by publishers that his stories “have neither head nor tail”. When he’s not busy at his typewriter, he keeps himself trim with something that he’s dubbed the “gym-tonic” workout – not surprisingly, this involves a very light amount of exercise with disproportionately large servings of gin and tonic.

Meanwhile, Georges’ glamorous wife goes by a different name every day, apparently according to her husband’s whims. Hortense one day and Marguerite the next, she seems to go along with it until her husband dares to christen her Renée one morning and she puts her foot down.

Together, the narrator’s parents seem to spend most of the novel dancing to old jazz on their gramophone (Mr Bojangles is a favourite), and holding extravagant parties in their Parisian apartment or in their castle in Spain.

Thankfully though, their bills and tax correspondence are all taken care of. They lie in a huge heap in a corner of the entrance hall, perfect to land in after taking a Kamikaze-style running jump across the room.

Behind this seductively chaotic façade however,  the family’s bohemian lifestyle is on shaky ground. Just like with the mountain of post precariously piled up in their apartment, only time will tell whether their carefree lifestyle will catch up with them.

Why you should read it:

Bourdeaut’s portrayal of this shambolic family unit from a child’s viewpoint is economically written and deftly handled. Just like in Simone’s song Mr Bojangles, the novel takes the reader from delirious highs to total unhappiness and back again in a short space of time.

And rather like Holly Golightly in Breakfast at Tiffany’s in fact, the characters embrace hedonism and living in high spirits. They also clearly take Lily Bollinger’s mantra to heart, as they open champagne at any time or hour of the day. It’s uncorked when they’re sad, when they’re happy, when they’re lonely or just when they feel like cracking out a bottle of the good stuff.

Cocktails are sipped and guests invited around at any time or hour of the day whilst being encouraged to throw darts, as described in one particularly funny passage, at a poster of French crooner Claude François’ face made into a giant dartboard.

If you fancy a bit of French-style escapism this summer, this is the book for you.

And if you like what you read here, why not check out my book review of Pierre Lemaitre’s Au Revoir Là-Haut?