It’s been a few months now since my last post, but it’s good to be back and blogging again!

In the time that’s passed since I last posted on here, a lot has been going on, French-themed or otherwise.

The Tour de France is now in full swing, with Britain’s Geraint Thomas in the lead and wearing the yellow jersey.

And, of course, France have won the World Cup this year! Twenty years after their last win in 1998, they lifted the trophy in Russia this year the day after Bastille Day.

I watched the final with my flatmate and her friends in a London pub, which was packed with French fans. They would launch into the French national anthem as soon as the ball started nearing the goal. Kylian Mbappé, Antoine Griezmann and Paul Pogba all helped their team along to victory, causing the pub to erupt in cheers, whistles and singing, before everyone gathered out in the street to celebrate and sing La Marseillaise again as loudly as they could.

And almost two weeks after watching France’s football victory, I was lucky enough to get my latest fix of French culture last night, this time at the Theatre Royal Haymarket with their dual-language production of Tartuffe.

Adapted from the classic comedy by Molière, a.k.a France’s answer to Shakespeare, this modernised version is performed in a mixture of English and French.

It’s only on for a few more days, until Saturday 28th July. If you’re interested in watching the play, you can reserve tickets here. 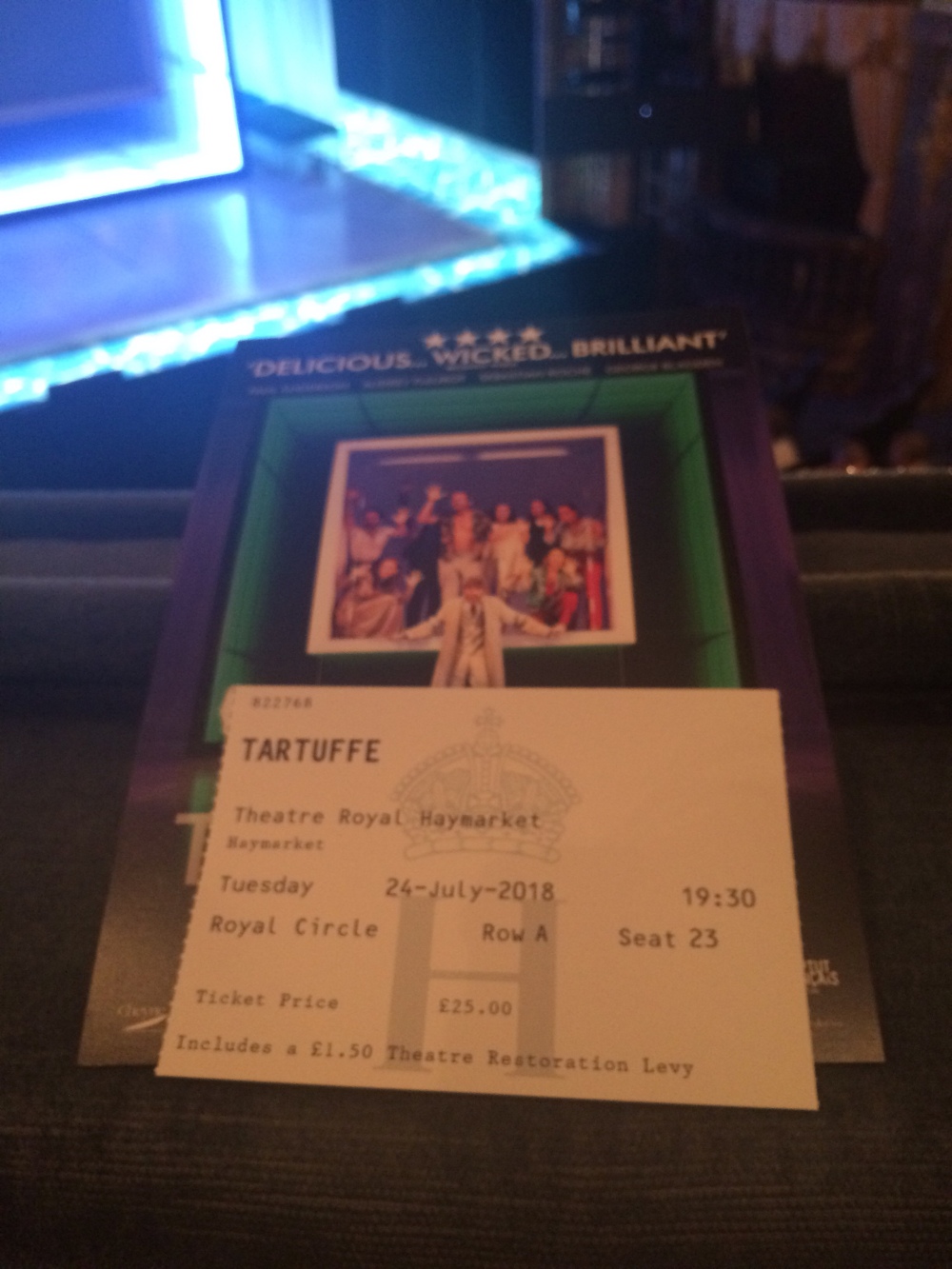 The play has a cast who will be familiar to both English-speaking and French-speaking audience members.

British actor Paul Anderson, who had roles in The Revenant and Peaky Blinders, plays the title role.

He is ably supported by Sebastian Roché as Orgon, while Olivia Ross and George Blagden, in his West End début, are his daughter and son Mariane and Damis. Orgon’s wife Elmire is played by French actress Audrey Fleurot, well-known to both French and British audiences through her role as defence lawyer Joséphine Karlsson in Engrenages, which was adapted for English audiences as Spiral.

Where is it showing?

It’s on at the Theatre Royal Haymarket in central London.

The theatre, which is on Suffolk Street, is in walking distance of a few different tube stations. The nearest tube station is Piccadilly Circus, but Leicester Square, Covent Garden and Green Park are also within a fifteen minute walk of the theatre.

Why should I see it?

Apart from the fact that this is one of the few – if not the only – French play to be showing in London, it’s an adventurous and topical adaptation of Molière’s comedy.

Although there are previous examples of productions of Tartuffe being transposed from the play’s original seventeenth-century Paris setting to modern-day Istanbul and 1920s America, with a new production set among Birmingham’s Muslim community arriving in Stratford in September, this version feels particularly relevant, due to Hampton’s decision to set it in contemporary America.

Forget the bourgeois environs of seventeenth-century Paris: all of the action now takes place in a sleek glass-walled pad owned by a film tycoon (Orgon) in modern-day California.

The new setting is particularly effective in highlighting the hypocrisy of Tartuffe’s character that is clear in Molière’s original text. First of all, Tartuffe’s manipulative nature is cleverly brought out in the production team’s decision to cast him here as an American evangelist who attempts to convert the impressionable Orgon to his beliefs. In doing so, he cunningly makes Orgon think that he cannot live without him. This causes Orgon to distance himself from his other family members and to elevate Tartuffe to a status of being his closest friend and most trusted adviser, bringing out the dark side-effects of Orgon’s close relationship with the title character. The production also emphasises Tartuffe’s duplicitousness by framing it within the current American political climate of ‘fake news’ and ‘post-truth’, with (presumably tongue-in-cheek) references to a ‘great president who followed this whole incident on Twitter’.

As well as a new setting, this version – adapted by Christopher Hampton – is performed in a mixture of French and English. ‘Surtitles’ (subtitles on two giant screens in the theatre) are used to translate any English dialogue used in the play for French audience members and any French dialogue for English members. The French dialogue is mostly taken from the original French text written by Molière, while the English dialogue is a modern translation that still stays reasonably faithful to the spirit of the original French text.

All of the cast members give convincing performances, which are made all the more impressive by the fact that they switch frequently between French and English throughout the play.

Although the frequent alternation between English and French throughout this production can make it seem disjointed at times, the cast and crew have made a very good attempt of adapting Tartuffe for a modern audience as well as making it culturally and linguistically accessible for non-French-speaking audiences with the addition of ‘surtitles’ and the sections with modern English dialogue.

Although it is an ambitious aim to have adapt such a well-known play and to perform it in two languages, the cultural and linguistic relevance of this production is clear and well-intentioned.

The intertwining of French and Anglo-Saxon languages and cultures suggests that unity and diversity brings power and strength, while the fact of being monolingual (tellingly, Tartuffe is the only character in the play to stick to English rather than switching between French and English) ultimately leads to isolation and marginalisation.

Equally, this version of Tartuffe is a useful starting point for newcomers to French literature and theatre, and it will hopefully inspire the teams behind other French-language theatre productions – either in their original format or as an adaptation of the original – to open on stage in London in the coming months.

Have you been to see Tartuffe? What did you think?

Let me know in the comments below! 🙂