As we get into the second week of this French-language series on BBC4, we’re in for another double bill of nervy tension and secrecy.

If you missed the first two episodes, which are still available on BBC iPlayer until the end of the month, why not read my review here? 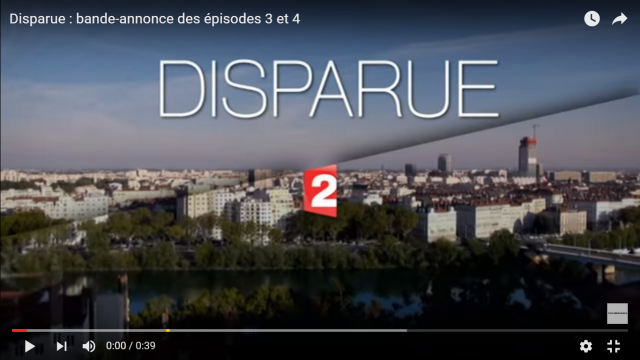 At the start of episode three, the police are still searching for clues that they hope will lead them to Léa Morel. She was last seen celebrating her seventeenth birthday with her friends in Lyon, and has now been missing for a week.

Léa’s parents Julien and Florence are still struggling to come to terms with the shock that their daughter has seemingly vanished without a trace.

While they try to comfort each other, they also find themselves under the microscopic gaze of Commandant Bertrand Molina, a particularly meticulous member of the local police force.

Despite Guérin’s softly-softly approach, Léa’s family still suffer the full impact of the investigation. Thomas, Léa’s brother, is taken in by the police for questioning, and Julien becomes increasingly frustrated with the police’s handling of the case.

The exasperated police officers, in turn, soon come to the conclusion that they are wasting their time, as they still do not appear to have any firm lines of enquiry.

On a lighter note, Léa’s feisty little sister Zoé proves to be a self-defence expert, having held her own in an argument at school. Florence is then hauled into the headmistress’s office to explain why her usually mild-mannered daughter punched a boy in her class.

All of this of course adds to Florence’s anxiety whilst she works hard to keep her family together and to find out the truth about what has happened to her daughter.

The fourth episode then begins with Molina and co. following up a potential lead at the police station from a man who claims to have killed Léa and buried her in his garden.

This episode proved to be even more fast-moving than the third, as we found out a lot more about the secrets that Léa had been keeping from her friends and family.

Frustratingly for the audience but luckily for the programme’s makers, it’s still unclear about which of these revelations will turn out to be genuine hints or red herrings about Léa’s disappearance.

The decision to base the series around a main character’s disappearance is particularly effective, as the resulting suspense and tension brews up conflicts between her family and friends and divides them rather than bringing them closer together.

This means that all of the characters, along with the audience, are playing an elaborate game of catch-up with each other. They all find out different information at different times, and it is up to them to decide whether they can trust what they have discovered or not.

The end of episode four now marks the halfway point in the show, and I definitely think it’s worth staying with the series to see how things will turn out. The latest episode finished on an uncertain note, so I’m looking forward to what’s in store next week!

Have you been watching The Disappearance on BBC4?

If you’re interested in watching the series, you can find it here on BBC iPlayer.

And if you’ve seen any of the episodes, please let me know what you think in the comments below, on Twitter or on Instagram 🙂